From lament to blessing – Reviving Creation

On October 3, 2021, I helped to lead a multifaith service of prayer, celebration, and resolve at Old South Church in downtown Boston.  Organized by Rev. Fred Small, Policy Director of Massachusetts Interfaith Power & Light, “Love. Earth. Justice.” brought together representatives of indigenous, Jewish, Muslim, Hindu, Buddhist, Protestant, and Roman Catholic communities. Near the beginning of the service, I spoke about climate grief; at the end, I offered a blessing.

Friends, I want to acknowledge the courage and the tenderness in this room.  Courage, because it takes courage to see clearly what human beings are doing to our precious planet.  It takes courage to hold a steady gaze and to witness the melting glaciers, the bleaching coral reefs, the withered fields and bone-dry reservoirs, the flash floods and massive downpours, the record waves of heat.  It takes courage not to look away but to hold a steady gaze as climate change makes sea levels rise and islands disappear, as oceans grow acidic and full of plastic, and as vast populations of our fellow creatures disappear. 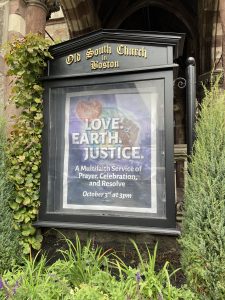 Thank you for your courage, and thank you, too, for your tender heart.  Thank you for all the moments – and maybe this is one of them – when you allow yourself to feel your emotional response to what we have lost and are losing as climate change accelerates and as governments in the thrall of the fossil fuel industry fail to take decisive, meaningful action to address the crisis.

Here in this quiet space and with the support of each other’s company, virtually and in person, I want to honor our tender hearts. Grief is the normal, healthy response to loss, but the culture we live in doesn’t handle grief well. Have you noticed that? Maybe we sidestep our grief because we’re afraid of looking weak, sentimental, morbid, or pathetic. Or because we’ve taken in the constricting message, “Big boys don’t cry” and “Nice girls don’t get angry.” And some of us avoid thinking about climate change because we fear that our emotions will overwhelm us.

Are we willing – can we allow ourselves – to take a moment, or maybe more than a moment, to feel our grief, fear, and outrage as parts of the world become too hot and humid for humans to survive, as children choke from asthma in our inner cities, as millions of climate migrants are displaced from their homes, or as the great redwoods burn, those ancient trees that survived for thousands of years and through hundreds of fires and could now disappear because of forest mismanagement and a changed climate?

Are we willing – can we allow ourselves – to take a moment, or maybe more than a moment, to mourn the loss of the ivory-billed woodpecker, which once thrived in swamplands down South and this week was officially declared extinct?  According to the Washington Post, it earned the nickname “The Lord God Bird” “because it was so big and so beautiful that those blessed to spot it blurted out the Lord’s name.”  Actually, every creature, every species, is a manifestation of God.  As Thomas Berry says [The Dream of the Earth], “To wantonly destroy a living species is to silence forever a divine voice.”

And now “The Lord God Bird” is dead.

Can we feel it?  Can we pause for a moment and feel it?

We are blessed that many faith traditions provide rituals and practices for accessing and processing grief.  In my own tradition, lament is an ancient form of prayer found in the Book of Lamentations, in the Psalms, in the Prophets, and in the words and actions of Jesus. He wept at the death of Lazarus, he wept over the city of Jerusalem, and he cried out to God on the cross, using the lament of Psalm 22. Lament can’t be dismissed as just self-pity or whining. Lament is a deep outpouring of sorrow to God.  It means daring to share our anguish with God.  It means daring to feel what is breaking God’s heart.

And lament can be empowering. Theologians from Abraham Heschel to Walter Brueggemann (and many more) point out that lament is the beginning of criticism of an unjust social order.  The powers-that-be would much prefer that we stay too busy, too distracted and numb to feel our emotional responses to what unjust systems are doing to human beings and to the planet on which all life depends. What Brueggemann calls “the capacity and readiness to care, to suffer, to die, and to feel”1 is the enemy of any society built on refusing to hear the cry of the Earth and the cry of the poor. Grieving is how we begin to challenge an unjust social order, cultivate hope, and open a space for bold actions commensurate with the crisis we are in.

So, let’s dare to lament!  Let’s tell the truth. Our hearts are breaking, because that’s how fiercely we love this beautiful world that God entrusted to our care.

Where do you feel the ache of the Earth?  What is breaking your heart?

May God bless us, my friends, for our bodies are one with the body of Earth.

May God bless us, for the rivers and seas run through our veins.

May God bless us, for the spirit of life breathes in our lungs.

May God bless us, for the fire of love burns in our hearts.

May we go forth as healers and justice-seekers, filled with God’s spirit.