Under bright skies, scores of people gathered on September 13 in front of the Springfield, MA office of Congressman Richard Neal to urge him to support full funding of the $3.5trillion budget reconciliation package. As Chair of the House Ways and Means Committee, Rep. Neal is playing a critical role in determining the size and scope of the human needs that this bill will meet and how fully it will invest in solutions to the climate crisis. 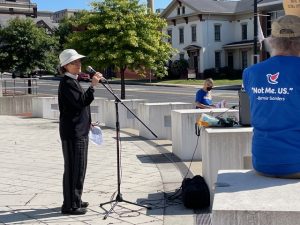 I spoke about the moral imperative to fund the legislation; other speakers addressed the bill’s impact on health care, housing, jobs, and poverty. This legislation is being actively supported by faith-based climate groups across the country, including Interfaith Power & Light, Creation Justice Ministries, Catholic Climate Covenant, Dayenu, and many more.

Some of my remarks are below: 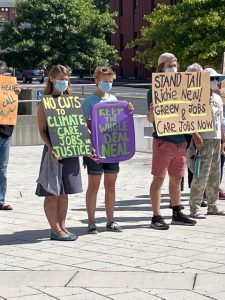 I’m sure you know that last week, for the very first time, three of the world’s top Christian leaders – Archbishop of Canterbury Justin Welby, Pope Francis, and Ecumenical Patriarch Bartholomew – issued a joint statement on climate change and made an urgent appeal for the future of the planet. In this extraordinary statement, the leaders of the Anglican Communion, the Roman Catholic Church, and the Eastern Orthodox Church called on people – called on us – to pray for world leaders ahead of the U.N. climate change conference (COP26), which will be held in November. And these Christian leaders called “on everyone, whatever their belief or worldview, to endeavor to listen to the cry of the earth and of people who are poor, examining their behavior and pledging meaningful sacrifices for the sake of the earth which God has given us.” 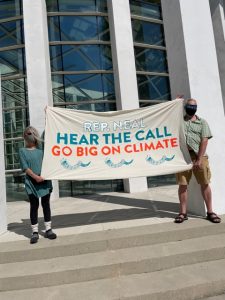