The past 24 hours have stretched my sense of time.

One morning I come across a report that in a far off cave in South Africa, scientists have discovered the bones of a previously unknown branch of the human family. A photo on the front page of The New York Times shows an ancient skeleton, neatly laid out from head to toe. The bones of the feet, according to one scientist, are “virtually indistinguishable” from those of modern humans. The finger bones are “extremely curved,” clearly adapted for climbing, and the skull seems to have sheltered a brain no bigger than an orange – one-third the size of a modern human brain. Named after the Rising Star cave in which the bones were found, these ancestors are called Homo naledi (“star” in the local Sesotho language). They walked the Earth more than 2.5 million years ago.

I don’t know what these distant relatives were like – what they thought about, how they spent their time, what mattered to them. But I imagine that in some ways they were just like us: they searched for food when they were hungry; they wept when they were sad; they looked for shelter and safety in a difficult world; they cared for their nearest and dearest. Scientists note that Homo naledi repeatedly placed the bones of their dead in an inaccessible cave, a fact that makes me want to say “the bones of their beloved dead.”

I bow to my ancestors who lived nearly 3 million years ago. Somehow we are kin.

The next morning I come across another report in The New York Times – this one placed not on the front page, but on page 10, as if the editor hoped to shield the reader from frightening news. A new study reports that burning all the world’s deposits of coal, oil, and natural gas would raise the global temperature enough to melt the ice sheet that covers Antarctica, along with the rest of the earth’s land ice. Sea levels would likely rise more than 200 feet.

The big surprise to scientists is that the melting could happen very quickly. Scientists used to think that it would take many thousands of years for Antarctica to melt. It turns out that once large-scale melting begins, half the melting could occur in as little as a thousand years. At that pace, the ocean could rise about one foot every decade, about 10 times faster than it is rising now. The article notes: “Such a pace would almost certainly throw human society into chaos, forcing a rapid retreat from the world’s coastal cities.” 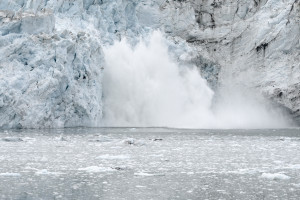 As the lead author, Ricarda Winkelmann, puts it: “To be blunt: If we burn it all, we melt it all.”

What takes my breath away is the list of the world’s regions that would be affected by a sea-level rise of 200 feet. The list of cities lost includes (among others) Miami, New Orleans, Houston, Washington, New York, Amsterdam, Stockholm, London, Paris, Berlin, Venice, Buenos Aires, Beijing, Shanghai, Sydney, Rome and Tokyo.

I read the list of cities printed in The New York Times. I touch my fingers to the page, as if physical contact can help me absorb these facts and make them real. I recall the startling new report from James Hansen and 16 other top climate scientists, which predicts that significant sea level rise could be swift and abrupt. Oceans could rise as much as ten feet in as little as 50 years, which means that we would lose all the coastal cities of the world.

The people living in those ruined cities could include my beloved children and grandchildren. I don’t need to exercise any imagination or empathy to know what these people will be like. They will be just like us. They will search for food when they are hungry, and they will weep when they are sad. They will look for shelter and safety in a difficult world, and they will care for their nearest and dearest.

I know in my bones that we are kin.

That night I go outside and stand barefoot in the backyard. The toes of my feet, not so different from those of Homo naledi, dig into the cool grass. Where am I in time? Behind me, in the past, extend some 3 million years of human evolution. Ahead of me lies a human future that could be unimaginably chaotic and short. Here, in this precious, passing instant of time, I stand on the place where past and future meet.

That place is on fire with love.

Surging through the dark night air and rising up from the earth beneath my feet are gratitude for the priceless gift of life, grief for what we’ve lost, anger at what we’ve done, and a love that knows no bounds. I feel an urgent call to spend my life well, to place it in the service of life. 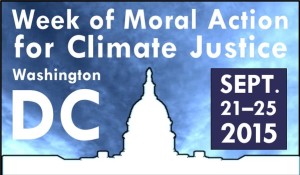 Next week I will head to Washington, DC, to participate in the Week of Moral Action for Climate Justice (Sept. 21-25). Pope Francis is coming to DC to address a joint session of Congress, and people of all colors, creeds, and faiths will converge on our nation’s Capitol to amplify his unequivocal call to humanity to create a just and sustainable future. All eyes are on the U.N. climate talks that will be held in Paris this December, which we fervently hope will chart a course to a low-carbon world.

The Pope’s encyclical, Laudato Si’ (Praise Be to You), draws from the best of the Judaeo-Christian tradition. As Wen Stephenson points out in a fascinating cover story in The Nation, the encyclical reclaims the once-marginalized terrain of liberation theology and offers a radical critique of the economic and social system that drives climate change. Francis highlights the fact that in a world beset by a disrupted climate, those who are poor have the fewest resources and are the least able to adapt. What’s more, the same mindset and economic system that exploit the Earth are the same mindset and economic system that exploit the poor. The cry of the Earth and the cry of the poor form a single cry and should evoke an integrated, comprehensive response.

The encyclical itself has generated a strong response: negative reviews from right-wing politicians wedded to the fossil fuel status quo and ringing endorsements from religious leaders worldwide who view climate justice as a moral imperative.  More than 400 rabbis have signed a Rabbinic Letter on the Climate Crisis that was timed to support the papal encyclical.  Islamic leaders from 20 countries recently released the Islamic Declaration on Climate Change, urging action based on a religious mandate to protect the planet. Anglican bishops just issued a fresh call for action on climate justice.

During the week in DC I will offer a prayer at the National Prayer Breakfast for Creation Care, hosted by National Religious Coalition for Creation Care (NRCCC), and I will offer a prayer at the Interfaith Prayer Vigil near the National Mall that concludes the marking of Yom Kippur, one of the holiest days in the Jewish calendar, and a day of atonement. I will walk through the halls of Congress, delivering copies of a letter about the climate emergency that I took the lead on writing on behalf of NRCCC, and I will stand with thousands of people on the National Mall to watch on Jumbo Trons as the Pope delivers his message to Congress. That night I will savor a celebration of song, prayer, sermons, and poetry about faith and climate at the National Cathedral, which will be live-streamed nationally.

For too long humanity has been caught in a trance of greed, resignation, and shortsightedness, as if we have no choice but to keep drilling and fracking, keep plundering the earth and keep plundering the poor. We stand at the brink of disaster. U.N. Secretary General Ban Ki-moon has called it our “global suicide pact.”

But maybe we will start to apprehend the mystery of time, a sacred mystery that extends far beyond our own little lives. We belong to something much greater than ourselves. After all, human beings were born from stars. Members of Homo naledi are not the only Star People – we all are. We exist within a great sweep of Milky Way time. Yet we are also faced with the fact, as Martin Luther King, Jr. once said, that “…tomorrow is today. We are confronted with the fierce urgency of now.”

In the short span of a lifetime each one of us has countless opportunities to bear witness to what Dante called “the love that moves the sun and other stars.” That love is moving through us, too, and in the brief time we Homo sapiens have left in which to save life as it has evolved on this wondrous planet, it is our call and privilege to do everything we can, because we love our natural world and our descendants, those born and not yet born. They are our future and we are their past.

So we reach out to the ancestors who came before us and to the descendants who, God willing, will arrive long after we have vanished from Earth and are only bones in the ground. We reach out to our human neighbors, to children and the elderly, to the vulnerable and poor, to the countless refugees already on the move as seas rise and drought spreads. We reach out to the living world around us – to all that has been desecrated, to the blasted forests and dying meadows, to the poisoned, acid-drenched oceans and the convoluted air. We reach out in love to all of you, and we say: I stand with you. I belong to you. I am part of you. I will not let you go. We are in this together. I will join the fight to re-weave the web of life.

The most comprehensive schedule I’ve found for the events going on in DC during the Week of Moral Action for Climate Justice is here.

September 21: The National Prayer Breakfast for Creation Care will begin at 10 AM, at Capitol Hill Lutheran Church, 212 East Capitol St NE, Washington, DC 20003.
September 23: Interfaith Prayer Vigil will begin at 7:00 p.m. near the National Mall at John Marshall Park (at Pennsylvania and 4th Street NW, near Judiciary Square Metro), organized by Franciscan Action Network.
September 24: Ignatian Solidarity Network is helping congregations to organize “watch parties” of the Pope’s historic address to Congress, offering a free step-by-step guide for how to set one up.
Three watch parties are scheduled at 7:00 p.m. in the Pioneer Valley (in Amherst, Northampton, and Longmeadow, MA). Details are here.
At 12:30 p.m. on September 24, the same day that Pope Francis addresses Congress, Springfield Climate Justice Coalition will hold an important rally on the steps of the Springfield, Mass. City Hall, to urge the city to fund and implement a climate action plan. Download a flier here: SpringfieldRallyForClimateJustice2015flyer. Please come if you can!

6 Responses to “This time, big time”