On a tumultuous spring afternoon of downpours alternating with blue skies, several hundred people gathered today in front of the Federal Courthouse Building in Springfield, Massachusetts, to protest a proposed new gas pipeline.  The utility company Eversource wants to build a new “natural” gas pipeline through the city’s residential neighborhoods, including through many environmental justice communities.

Local opposition to this toxic pipeline has been fierce. Arguments against the pipeline include its negative impact on public health, its risk of sparking fires and explosions, its high cost to ratepayers, and its acceleration of climate change just when the Intergovernmental Panel on Climate Change has declared a “code red” for humanity. Does it make sense to increase Springfield’s long-term dependence on “natural” gas when Massachusetts’ Climate Roadmap Bill mandates a transition away from fossil fuels?  The two groups that organized the rally – the Springfield Climate Justice Coalition and the Longmeadow Pipeline Awareness Group – contend that Springfield will reach a state of energy resilience and reliability only when our energy network is diversified and localized with renewable energy.

I gladly accepted an invitation to speak at the rally. Awaiting my turn, I listened with pleasure to community leaders, politicians, activists, elders, and young people, who spoke with ardor, humor, and outrage about their opposition to the pipeline.  I also kept a wary eye on the sky.  Just before the rally, a rainstorm and a sharp gust of wind had practically run off with the tent that sheltered the sound system. After an interlude of sunshine that allowed the rally to carry on, dark clouds were now forming in the northwest, accompanied by grumbles of thunder. The wind was picking up.  Time was evidently running out – our window of opportunity was quickly closing.  I watched a policeman stride through the crowd to have a word with the organizers.  Just as my turn came to speak and I stepped to the microphone, a clap of thunder rang out overhead.  Rain began to fall.  “The rally is over!” an organizer called out.  “Everyone must leave!”

Home I went, without delivering my remarks.  Here is what I wanted to say in person to the crowd. 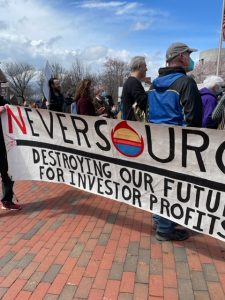 Friends, what a blessing to be with you! Our gathering today includes people of many faiths.  Among us are Buddhists, Jews, Protestants, Catholics, Unitarian Universalists, and members of other traditions, as well.

So, people of faith and good will are standing together to cry out for climate justice.  Our fight right here in Springfield to stop a dirty pipeline is one small but significant part of a worldwide movement.  Our event today is part of Greenfaith’s Sacred Season for Climate Justice, for this year, from the end of March through early May, people of faith around the world are using their holy days and holy seasons – Ramadan, Passover, Holy Week, Easter, and more – as a time to affirm that fighting for a just and healthy future is central to our spiritual identity and spiritual vocation. We’ve heard the latest IPCC report.  We know that the time is “now or never” if the world is going to avert climate disaster.

In my Christian tradition, tomorrow is Palm Sunday, the day we remember Jesus’ non-violent entry into Jerusalem to confront the unjust powers that be.  Jesus’ message that we love one another meant that he stood against systems of domination that hurt the poor and poison the land and crush the spirit.

With him, and with prophets and sages of every tradition, we proclaim that we don’t need one more toxic pipeline. Let it be known: the Earth is sacred, and we won’t stand idly by and let it be destroyed.

2 Responses to “No new pipelines: Climate justice is God’s justice”